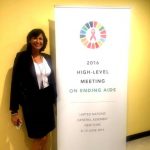 Dr. Rochelle Walensky and colleagues find that implementing the United Nations 90-90-90 targets for HIV testing and treatment would be an expensive but ultimately very cost-effective way to increase survival, reduce the number of children orphaned by HIV, and contain the global AIDS epidemic. The study used South African epidemiologic data and results from HIV screening and treatment programs to give a realistic picture of the likely impact of 90-90-90 in South Africa and compared it with the current pace of HIV detection and treatment over the next 5 and 10 years. Using a computer simulation model, their analysis revealed that, over the next decade, the 90-90-90 strategy would avert more than 2 million new HIV infections, more than 2.4 million deaths and over 1.6 million orphans – saving an additional 13 million patient-years of life compared with the current strategy. Over the same period, the cost of the 90-90-90 effort would be $54 billion, but taken as a whole, the study found that investment in 90-90-90 would yield a cost-effectiveness ratio of $1,260 per year of life saved, well within what would be considered very cost effective for South Africa and a ratio similar to that of HIV treatment itself.